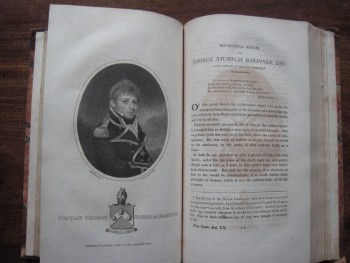 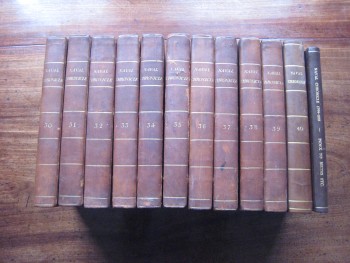 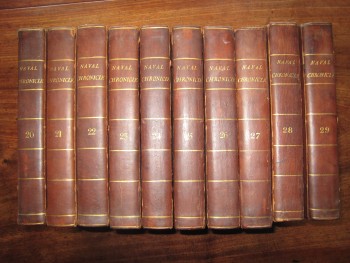 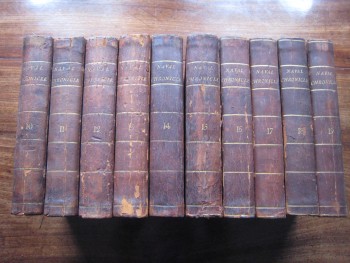 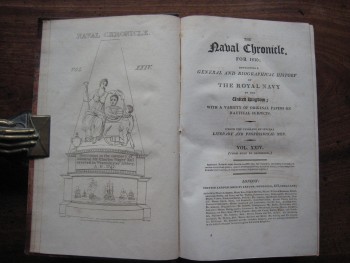 The Naval Chronicle Containing a General and Biographical History of the Royal Navy of the United Kingdom; with a Variety of Original Papers on Nautical Subjects. A Complete Run in 40 Volumes.

complete original set in 40 volumes, illustrated with over 524 engravings,ûin a contemporary calf binding, contact us for a full description. AJS: Please see our comments and individual volume notes regarding thisûset, available as a separate print-out upon request, with photographs asûemail attachments if required.ûKemp (Lt Cdr P.) Formerly Admiralty Librarian commented on this work:-ûA journal which was published by Joyce Gold and was at one time edited byûJames Clarke and John M'Arthur, who collaborated in writing the officialûlife of Lord Nelson, was issued in six-monthly volumes between the yearsû1799 and 1818. The series is valuable historically in that it spans theûgreater part of the two long wars with France (1793-1801 and 1803-1815).ûIt was illustrated with prints, including portraits which are often goodûand sometimes excellent, and a large proportion of its matter was directlyûcontributed by serving officers. For instance, after the Battle of theûNile, Nelson himself sent the editors, at their request, a characteristicû'Sketch of his Life', as did Lord Collingwood after the Battle ofûTrafalgar. Collingwood's sketch like many others, first appeared in anû'edited' version, and not to his advantage, but after his death hisûoriginal contribution was published, and it is found to be as direct andûremarkable as his letters.ûWhile even good contemporary material often needs to be regarded withûcircumspection, The Naval Chronicle is generally regarded as accurate andûremains a mine of detailed information not to be found elsehwere.ûBibliotheca Nautica, Part 1, 1928, entry 396: A complete set of thisûfamous work, containing several thousand articles on subjects of Naval andûMaritime interest. The work was issued monthly and for that reason is veryûseldom found complete, many plates usually being missing.ûCowie, entry 135: The Revd James Clarke, Librarian and Chaplain to theûPrince of Wales, and John M'Arthur, who had been Secretary to Lord Hoodûand Sir Hyde Parker, had both served at sea and knew Nelson. There areûmany references to him in the first twenty volumes of this work, which wasûpublished in half-yearly volumes. Particularly, Volume 3 includes materialûbased upon a 'Sketch of His Life' written by Nelson himself in 1799, andûvolumes 14, 15 and 16 are useful for Trafalgar. There are biographies ofûNelson's brother officers.

Title: The Naval Chronicle Containing a General and Biographical History of the Royal Navy of the United Kingdom; with a Variety of Original Papers on Nautical Subjects. A Complete Run in 40 Volumes.

The Naval Chronicle Containing a General and Biographical History of the Royal Navy of the United Kingdom; with a Variety of Original Papers on Nautical Subjects. A Complete Run in 40 Volumes.

This website uses cookies either for the usage of analytics software, marketing software, and/or to supply social media features.
Read more here.